If you live in America, Pumpkin Pie is probably what you have at Thanksgiving. In England, where we don't celebrate Thanksgiving, pumpkins come into the shops only around this time of the year- October. People mainly use them to carve faces in so they can light them for Halloween. So if I wanted to make a pumpkin pie, it would be now. Which is why I'm glad that bakerella posted her pumpkin pie recipe early and inspired me to give it a go! 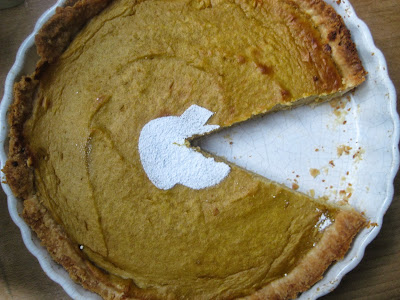 The American recipes I saw use canned pumpkin, something I couldn't find in my local supermarket. I made a pumpkin puree for the recipe I followed on BBC food and used bakerella's pie crust recipe. I was so glad that I had enough filling to make two pies, as I accidentally used the whole lot of pumpkin puree in the filling rather than half of it. (I wonder if it wouldn't have tasted that pumpkin-y if I hadn't done this.) 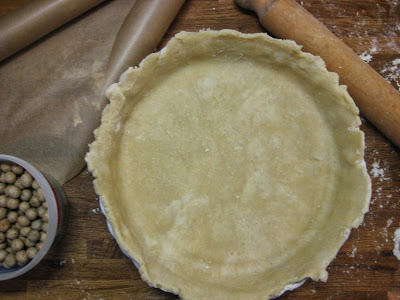 After tasting my pumpkin puree I wasn't fully confident that I would enjoy the pie. It didn't have a lot of flavour as you would expect from such a vibrantly coloured vegetable. But actually, the mellow flavour was lovely against the sweetness and the spices of the filling! It felt more like a tart than a pie to me, and made a lovely dessert served just warm: satisfying, unusual, and delicious. 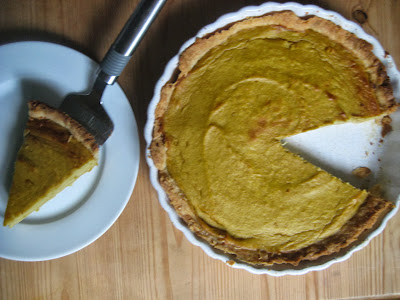 It also gave me the chance to practice my pastry. Of course, there's another difference of living in the UK: I call it a pastry case, not the pie crust. I blind baked the pastry case before adding the filling as the filling recipe is made for a pre-cooked pastry case. If you want your edges a bit neater than mine, which were trimmed after baking, trim them half way through blind baking.

Use the pastry recipe from this source.
•  After you have placed the pastry in the pie dish, place a large piece of greaseproof paper over the pie  and cover it with ceramic baking beans. This will stop the base puffing up too much.
•  About twenty minutes into blind-baking the pastry case, take out the baking beans and trim the edges if you've left it higher than the dish.
•  Bake for a further 10 minutes, or until the bottom is firm and just coloured.
Use the filling recipe from this source.
•  After the pumpkin has steamed until it is soft, blend it into a smooth puree with a hand blender or food processor or you will have lumps in the pie!
•  I used double the amount of pumpkin puree it said to, which was one small pumpkin, and it made two pies.
•  Serve just warm with double cream. 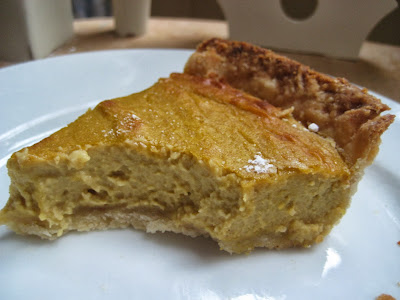