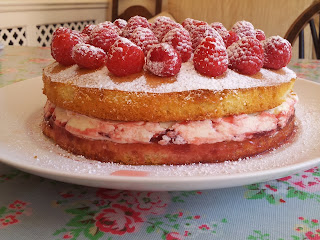 I had to opportunity to make this cake with my younger cousins last week. It was fairly quick and fun to make and tasty really good! The recipe was on the Waitrose site, which has loads, I mean about 5, recipes for Victoria sandwich, so it was hard to find the one we made. Here's the link: Victoria Sponge with Raspberry Jam and Buttercream. 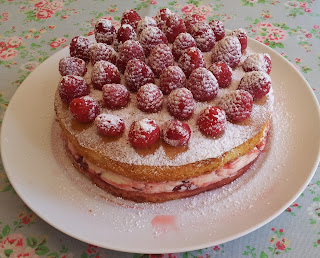 Using buttercream icing in the middle with nice raspberry jam was, in my opinion, better than using cream. To finish it off we added fresh raspberries and a dusting of icing sugar. I was inspired by the cake on the intro to 'The Great British Bake Off' which is covered in raspberries. Speaking of 'The Great British Bake Off,' it really makes me want to bake whatever they're making, as I woke up the morning after watching with a desire to bake bread! 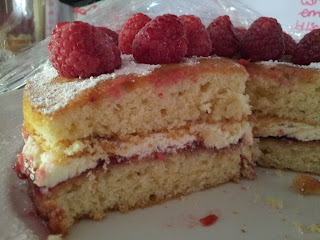 What is your ultimate Victoria sponge filled and topped with?
Posted by Izzy at 13:24