I recently made this pirate birthday cake for my little brother, taken from here. I was going to add the recipe and cake and icing info in one post, but it was so loooong that I am posting the cake and icing recipes first. 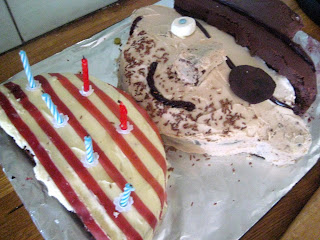 I have been using this cake recipe for a while as it is easy to make and produces a nice moist cake. This recipe has directions for making two cakes: a 9" and an 8", which are used for the Pirate Cake. If you put the mixture into muffin cases you will get 24 cupcakes which are delicious served warm topped with icing sugar. This is doubled from a recipe to make one 8" round birthday cake so you can also make to 8" cakes which can be sandwiched with the white buttercream icing.
There are three icing tones: white, skin tone and chocolate, which are made from a batch of white icing and a batch of chocolate icing.

Chocolate birthday cakes
Makes one 8" and one 9" cake, enough for the Pirate Cake
250g butter, softened
2 tsp vanilla extract
440g (2 cups) caster sugar
4 eggs
160ml (1+1/3 cup) water
400g (2+2/3 cup) self-raising flour
100g (1 cup) cocoa powder
Preheat the oven to 180C. Grease one 8" and one 9" round springform tin and line the bottoms with greaseproof paper.
Combine the butter, vanilla, sugar, eggs, water, flour and cocoa powder in a bowl with an electric mixer until combined. Then turn up the speed to medium and beat for 4 minutes until the mixture is smooth, paler in colour and has increased volume. The change over this beating time is really cool to watch!
Ladle the mixture into the pans, trying to make sure that they have the same depth of mixture. Don't worry about being too exact, mine were different and I liked the effect!
Bake until a cake tester or skewer comes out clean. This took mine about 35 minutes, but may take up to an hour. Leave to cool for a while in the pan and then release the sides of the tin for it to cool further.
Store in an airtight cake box until using.


White Buttercream Icing
250g icing sugar, sifted
80g unsalted butter, at room temp.
25ml milk
few drops vanilla extract
Beat the icing sugar and butter together, using a electric mixer or food processor. I add the icing sugar in 50g bits. Then add the milk and vanilla and mix until fluffy and light on a high speed for a while.
Set aside ready to use some for the skin tone icing.

Chocolate and Skin tone Buttercream Icing
250g icing sugar, sifted
80g unsalted butter, at room temp.
25ml milk
100g dark chocolate
Mix the icing together as in instructions above, then melt the chocolate, in the microwave, 30 seconds at a time. Add a small amount to the icing and beat until incorporated. This should produce a light brown.
Transfer a third of the mix to a separate container and mix in a third of the white icing to produce a light skin tone.
Stir up the rest of the chocolate and add to the remaining icing in the mixer. Turn on to a high speed and mix it all in to form a dark brown. Mix until soft and smooth. This will be a little firmer in texture to the other icing.